The USA (United States of America), also known as the United States (US or U.S.), or America, is a country basically located in the North America continent, consisting of fifty states, a federal district, 5 major territories, and various minor islands. At 9.8 million square kilometers (3.8 million square miles), it is the world's 3rd or 4th largest country by total area. With a population of over 328 million, it is the 3rd most populous country in the world. The national capital city is Washington, D.C., and the most populous city is NYC (New York City). 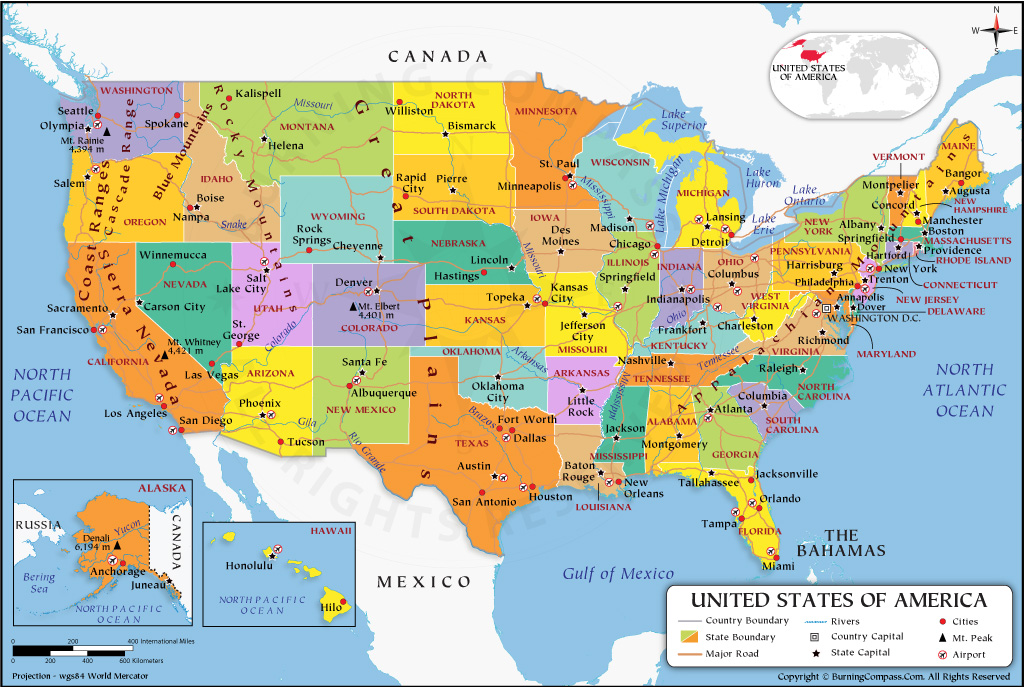 The United States of America is a country located in North America. It is also known as the United States or simply America. The country comprises an area of 3.8 million square miles (9.8 million square kilometres). Some sources claim the USA to be the third largest country in the world but according to the others it ranks at the fourth place in terms of area. The country’s vast territory includes 50 states and one federal district. Other areas include 326 Indian reservations, five major self governing territories and a few possessions. There are more than 328 million people living within the borders of the United States, making it the world’s third most populous country. New York City, which is located in the state of New York, is the country’s most populous city. Washington D.C. is the capital of the United States.

The history of the region of what is now known as the United States dates back many millennia. There is evidence that around 12,000 years ago Paleo-Indians arrived in the region from Siberia. In the 16th century, the region witnessed the arrival of European colonisers leading to people from various European countries emigrating to the United States. The original United States was formed from 13 colonies that were located along the East Coast. Later, disputes regarding taxation and political representation emerged between the US states and the British colonisers leading to the American Revolutionary War. The war led to the Independence of the United States from British rule. The late 18th century witnessed the expansion and acquisition of new territories by the United States. Over the years, new states were included and native Americans were displaced. By 1848, the nation covered a major part of North America. Slavery was legal in the Southern United States but was abolished with the victory of the Union over the Confederate states in the American Civil War (1861 - 1865). With the Spanish-American War and World War 1, the US emerged as a world power. The end of WW2 saw the US and the Soviet Union emerging as rival powers and engaging in proxy wars. But the two countries never entered into a direct confrontation. The Space Race was a competition between the two nations, and saw the US make a big leap when it sent the first humans to the moon. In 1991, the Soviet Union collapsed ending the Cold War and establishing the US as the world’s only superpower.

The US is a representative democracy and federal republic. It has three separate branches of government - a bicameral legislature, executive and judiciary. The country has played a pivotal role in the establishment of many leading organisations and is today the founding member of the International Monetary Fund, the United Nations, NATO, and World Bank, among others. The United States is also a permanent member of the UNSC. Over the years, people from all over the world have migrated to the United States making it a melting pot of cultures and ethnicities. The US is a great place to live because of the high standards of living and good quality higher education, low levels of corruption and high economic freedom. Though the country has a good human rights record, there are some issues for which the US has received criticism like inequality related to income and race, capital punishment among others.

Geography of the United States

The United States comprises 50 states and 1 federal territory. Of these, 48 states are contiguous and cover a combined area of 3,119,885 square miles (8,080,470 square kilometres). Of 3,119,885 square miles, around 2,959,064 square miles is contiguous land. Hawaii is situated in central Pacific and covers an area of 10,931 square miles. The five regions of American Samoa, Guam, Northern Mariana Islands, Puerto Rico and the US Virgin Islands are spread over an area of 9,185 square miles (23,789 square kilometres). The United States occupies the third place in size when according to land area. Russia occupies the first place, followed by China.

The United States ranks as the third or fourth largest country in the world according to area including both land and water. The Atlantic seacoast’s coastal plain opens up to deciduous forest and Piedmont’s rolling hills. The eastern seaboard is separated from the Great Lakes and the Midwest grasslands by the Appalachian Mountains. The Mississippi-Missouri flows north-south and is ranked as the fourth largest river system in the world. The west comprises the prairie of the Great Plains while the southeast is a highland region.

The rocky Mountains are located west of the Great Plains. They extend North to South across the entire United States. In the state of Colorado, the Rocky Mountains peak around 14,000 feet. The Great Basin, Mojave and Chihuahua are located farther west. The Cascade and Sierra Nevada have an altitude of more than 14,000 feet and are situated in proximity to the Pacific coast. The lowest and highest points are in California. The two points are situated at a distance of 84 miles from each other. Denali in Alaska is the highest peak in the United States. It has an elevation of 20,310 feet. The Aleutian and Alexander Islands in Alaska are home to active volcanoes while Hawaii comprises volcanic islands.

The territories of the United States that are located on the border of the Gulf of Mexico are hurricane prone. Alaska has a polar climate, while Hawaii, the territories in the Pacific and the Caribbean and the southern portion of Florida have tropical climate. The United States became a member of the Paris Agreement on Climate Change in 2016. In 2020, the country left the agreement but again became a member in 2021.

States and Territories of the United States

The United States, which is also known as the United States or America, is a federal republic and is located in North America. The country is composed of 50 states, and 1 federal district. Other areas include five major territories and several islands. Washington D.C., which is a federal district, is the capital of the United States. Of these 50 states, 48 are contiguous and occur the area between Canada and Mexico. The two non-contiguous states are Alaska and Hawaii. While Hawaii is situated in the mid-pacific and is an archipelago, Alaska in situated in North America’s northwest corner. There are numerous territories that are situated in the Caribbean Sea and the pacific ocean.

Under the Constitution of the united States, the states are bestowed with various rights and powers. Some of these include ratifying constitutional amendments, organising elections, regulating intrastate commerce etc. Every state of the country has a government and a constitution. There are three branches of the government which include the legislature, executive and the judiciary. Every state is represented in the federal Congress. This is a bicameral legislature and comprises two bodies - The House of Representatives and the senate. Every state of the country irrespective of its size is represented by two senators. Meanwhile, the strength of the representatives is in proportion to the decennial census which has been recently constitutionally mandated. Every state has the right to appoint electors to vote in the Electoral College. Their number should be equal to that of the senators and representatives from that particular state. Electoral College elects the President of the country. As per the Article IV, Section 3, Clause 1 of the Constitution, the Congress has the right to admit new states into the Union. When the united States was established it consisted of just 13 states. But over the years the new states were admitted into the union and today the country has 50 states along with the federal district.

According to Article I, Section 8 of the Constitution, the federal district, which is not part of any state, fall under the exclusive jurisdiction of the Congress. Prior to the passing of the 1973 District of Columbia Home Rule Act, the federal district did not comprise an elected local government. But the act delegated some powers to an elected council and mayor. Nevertheless, any law created by the council can be overturned by the or reviewed by the Congress. Further, the Congress also has a right to intervene in local affairs. The federal district is not represented in the senate because it is not a state. But, the residents of the district are represented in the House of Representatives through a non-voting delegate. The district can also select three electors to vote in the Electoral College. This right was bestowed on the district in 1961 following the ratification of the 23rd amendment.

States of the United States of America

Territories of United States of America

Inhabited Territories of the United States

Territories of the United States of America with no indigenous population

Territories claimed but not administered by the United States of America