The United States is a federal republic consisting of fifty states, a federal district known as Washington, D.C. (the capital city of the United States of America), 5 major self-governing territories, and various possessions. The forty eight contiguous states and Washington, D.C., are in North America between Mexico and Canada, while Alaska is in the far north-western part of North America and Hawaii is an archipelago in the midPacific. Territories of the U.S. are scattered throughout the Caribbean Sea and the Pacific Ocean. 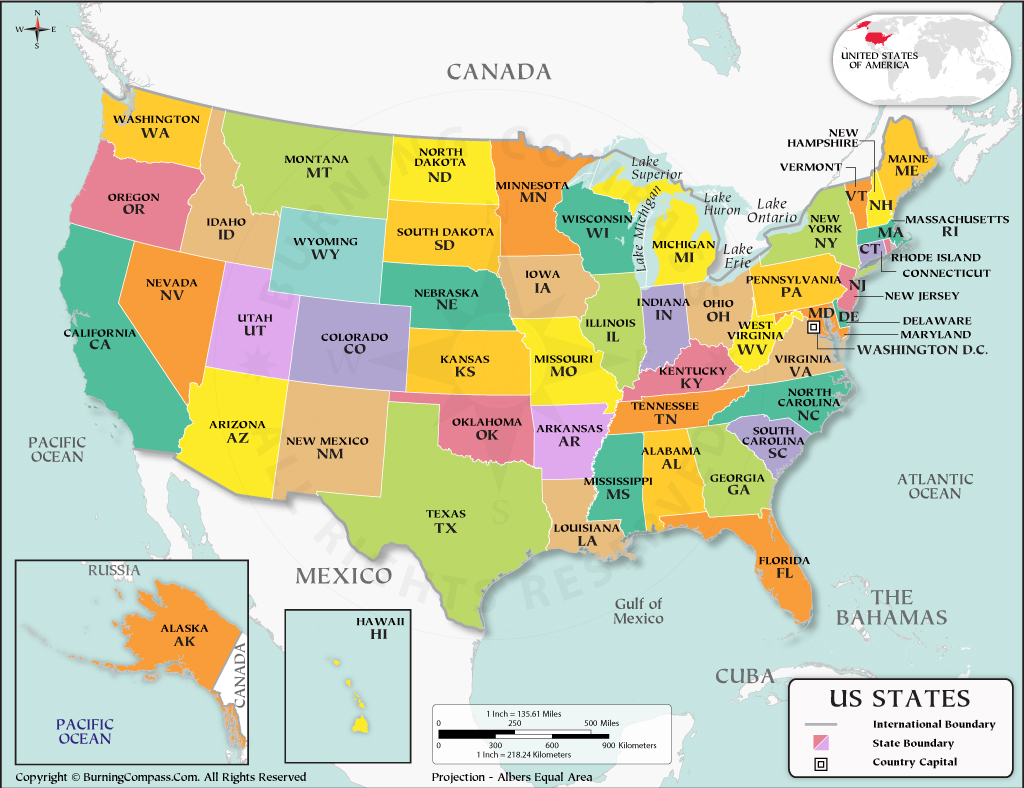 US State Map in Mercator Projection

About US State Map

Explore 50 states map to locate all US states, this US map with state names is US political map with all the states labeled.

Powers, Functions and Representation of the States of the United States

The United States is a huge nation which comprises 50 states and a federal district, Washington D.C., which is the capital of the nation. The area of he states is not uniform. While Alaska is the largest state of the country comprising an area of 665,384 square miles, Rhode Island is the smallest and covers an area of just 1,545 square miles. For a better administration, the all the 50 states are divided into counties or county-equivalents. These counties many have some sort of local government for an effective management of affairs; however, they are not sovereign and are subject to the laws of the state. the structure of the counties or county-equivalents differs from one state to the other.

Through their individual constitution, the government of each state of the United States is allocated power by the people. The government of every state in the country comprises three branches and these are the executive, legislature, and the judiciary.

Powers and functions of the US states

The States have a number of powers that are granted to them under the Constitution of the country. One of the most important powers of the states is the ratifying of the constitutional amendments. Some of the functions that come under the control of the state governments are public education and health, local law enforcement, regulating intrastate commerce, and local transportation, to name a few. However, these now receive funding from the federal government and are regulated as well. During, the past few years, the relations between the federal government and the states in the country have undergone some changes. Today, the federal government is playing a much larger role in state affairs as compared to the earlier times. In a nutshell, it can be said that the general tendency in the country is today more towards centralization.

States’ representation in the Congress and bicameral legislature

The Congress has been granted authority by the Constitution of the nation to admit new states into the Union. This authority has frequently been used and a number of new states have been admitted into the Union over the years. During the establishment of the United States in 1776, there were just 13 states in the country. Over the course of the next two years the number has significantly risen and today the United States comprises 50 states. The recent additions to the Union have been the two stats of Hawaii and Alaska. Both these states were admitted to the Union in 1959.

Meanwhile, the Constitution says nothing about the states’ right to secede from the Union. However, the Supreme Court had passed a judgment in this regard shortly after the end of the Civil War. In the Texas v. White case, which was argued before the Supreme Court in 1869, the highest court of the land held that the states couldn’t secede from the Union.

States of the United States of America

Territories of United States of America

Inhabited Territories of the United States

Territories of the United States of America with no indigenous population

Territories claimed but not administered by the United States of America

Facts about the United States